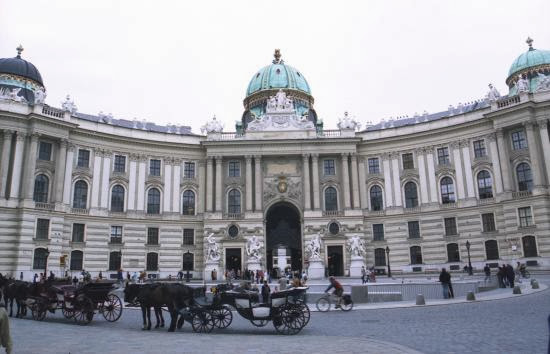 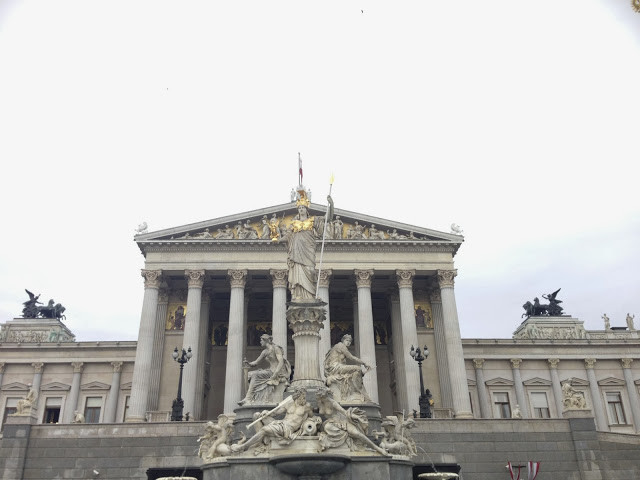 Vienna, in a word, is grandiose. The Austrian capital, which was one of the stops on our city tour of Central Europe, which also included Budapest, is brimming with opulent palaces, churches, museums, and parks, and its beautiful historic center is a UNESCO World Heritage Site.

The Little Ladies and I spent 48 hours in the city, and while that was not nearly enough time to see and do everything, it did give us time to wander around and this Imperial city and take in some of the splendor. We did not attempt to go off the beaten path to discover new and unspoiled places, but from the 100-year-old cafes to shopping at former purveyors to the imperial court, we stuck strictly to the tried and true.

Here’s a look at some of the things we did during our time in Vienna, which you should feel free to use as a guide if you ever visit.

When we first saw St. Stephen’s Cathedral at night, with its façade lit by project lights, the little ladies were immediately enchanted. In fact, Miss V proclaimed it was the prettiest church she’d ever seen, which is saying a lot because we’ve seen countless churches during our travels. 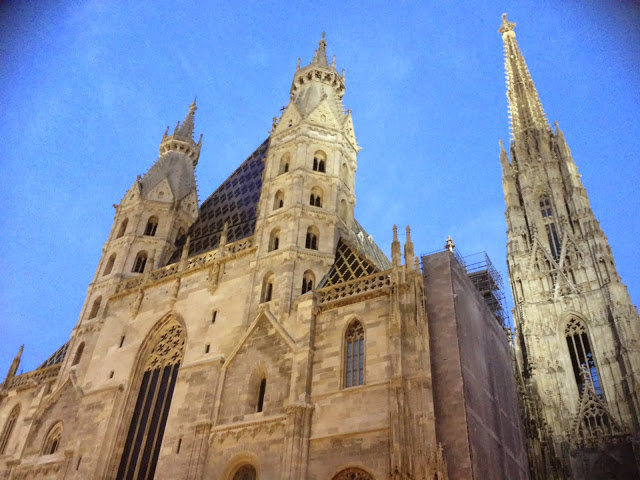 Though it has suffered devastating damage from numerous wars over the centuries, including a fire that severely damaged the cathedral and burned the roof down during World War II, St. Stephen’s Cathedral has managed to survive. 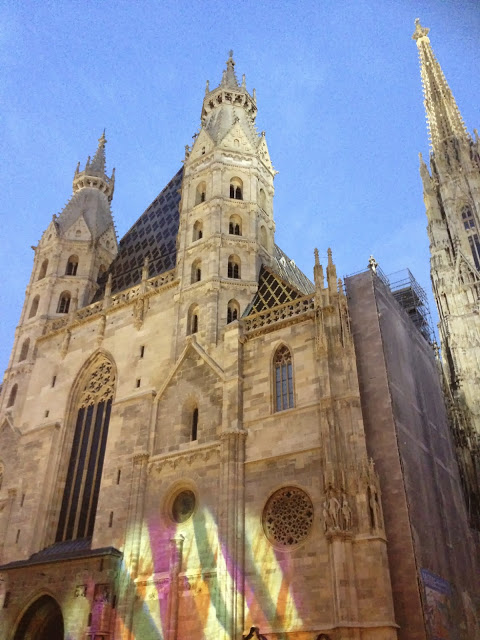 After the war, the cathedral was renovated and the roof repaired and decorated with colorful ceramic tiles donated by the Viennese citizens, which, with its 136-meter steeple, makes it one Vienna’s most recognizable landmarks.

The Hofburg Palace, also known as the Imperial Palace, was the winter residence of the ruling Habsburg family from the 13th century until 1918. Today the palace houses the office of the Austrian president, the Vienna Boys’ Choir, the Spanish Riding School and several museums. The little ladies and I didn’t go into the palace, deciding that it was a little more than our attention span could handle. Instead, we spent time in the Burggarten, the palace gardens, enjoying the incredible autumn weather.

We spent a lot of time just walking around Vienna’s historic center, admiring the splendid buildings of the Ringstrasse. And while this would normally be a pretty mindless activity, since Miss P is learning about the Habsburg empire in school and because we all learned a little bit about this era while we where in Prague a few days earlier, we were connecting the dots and forming a picture of what was going on in Central Europe back in the day.

While taking an introductory walk around Vienna, the little ladies and I passed the Albertina Museum. Though the museum has quite an impressive art collection, with works by Cézanne, Renoir, Picasso, and Klimt, we didn’t go in. However, Miss P did take the opportunity to run up and down its eye-catching stairs, painted to advertise the Matisse and the Fauves exhibition featured at the museum at the time. 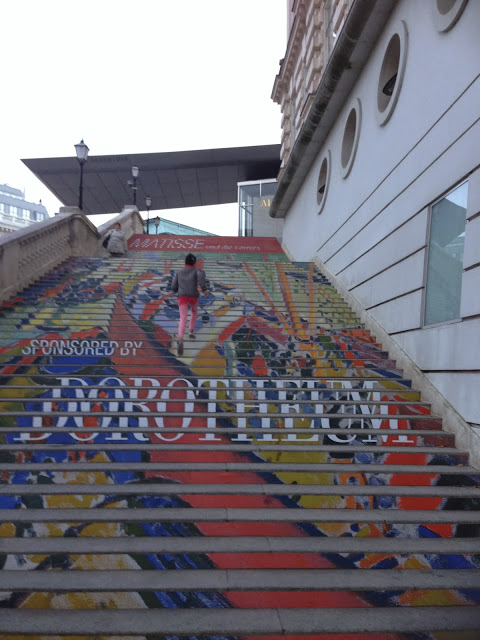 We did, however, go into the Jüdisches Museum Wien (Jewish Museum) where we went to a fascinating exhibition on the composer Richard Wagner, who despite being notoriously anti-Semitic, had extremely close associations with Viennese Jews. Aside from the exhibition, the museum was pretty bland, and I was surprised at how little there was about the history of Jews in Vienna. 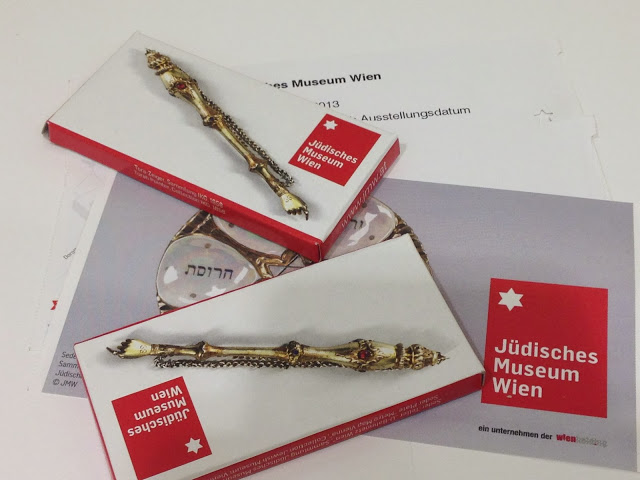 There is, however, another Jewish museum in town – Musuem Judenplatz – which we did not go to, but may have been more of that history.

Watching the world-famous Lipizzan horses do their training session, accompanied by classical music in a chandeliered Baroque hall at the Spanish Riding School was a fun way to spend a morning, and a good alternative if you can’t get tickets to a performance, which sell out weeks in advance and can be quite expensive. 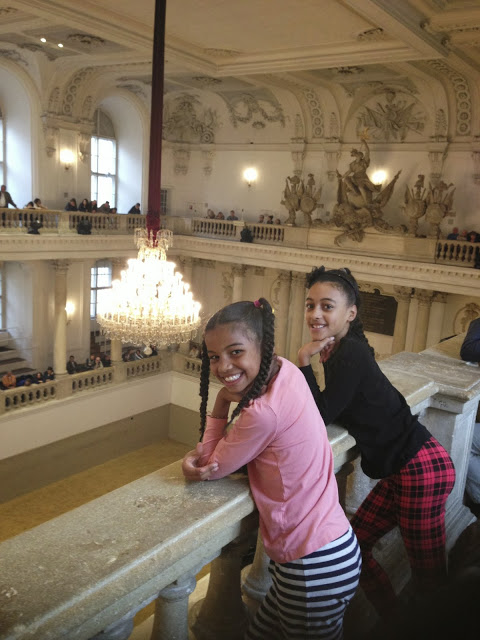 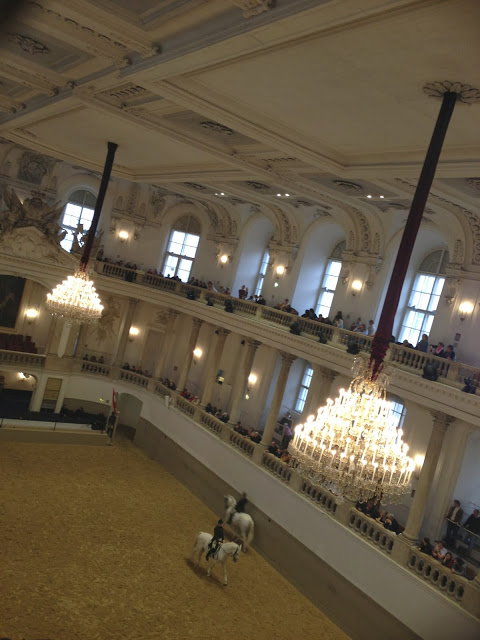 The sessions last for a couple of hours – though most people don’t stay for the entire session – and can be combined with a guided tour of the stables.

We also did some shopping, mostly of the window variety, pressing our noses up against the glass of the shops like Café Demel where we admired the beautiful marzipan sculptures in the window, including one of the Lipizzan horses like the ones we’d just seen at the Spanish Riding School. 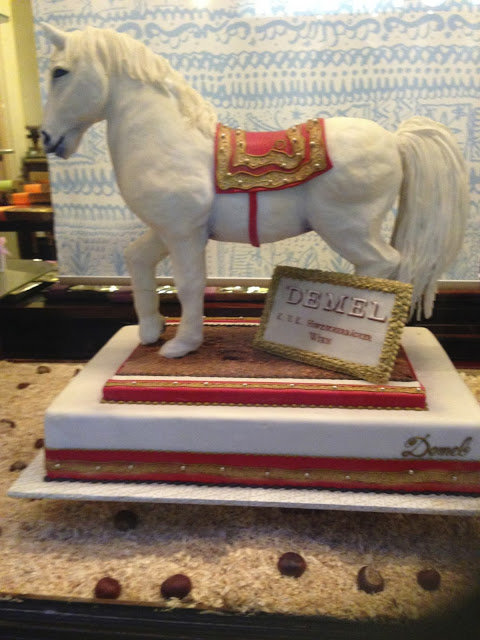 Immediately upon our arrival in Vienna following a 4+hour train ride from Prague, the little ladies and I headed for a café. Café Mozart, with its classic old world style setting and ornate décor, was the perfect café to indoctrinate us into Vienna’s café culture. 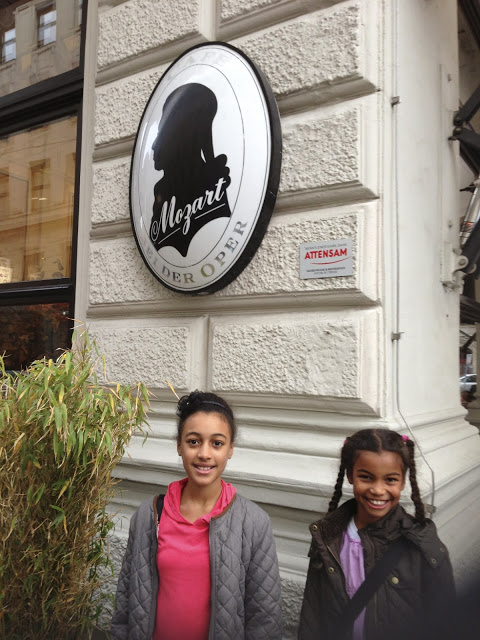 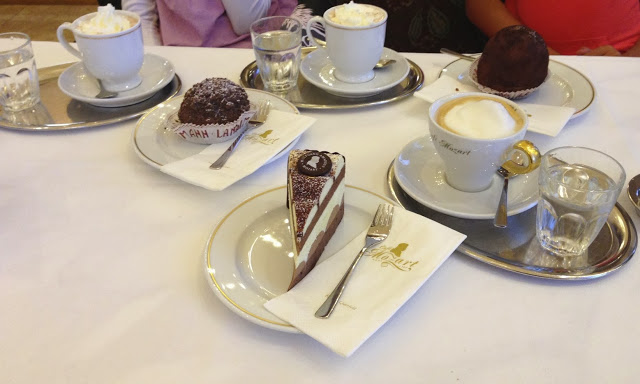 Even though it was way too close to dinner time, we indulged in some of the decadent treats on offer, including the signature Mozart Torte, hot chocolate and of course Café Viennese. We also paid a visit to Café Sacher, located opposite the Opera House and home to the legendary Sacher torte. 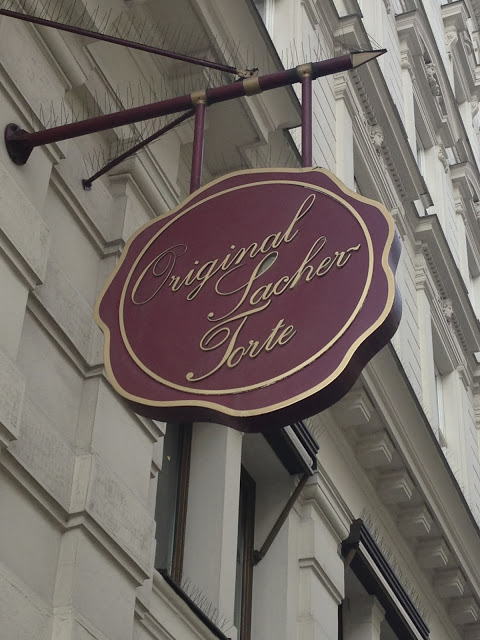 You cannot go to Vienna – or Wien – without having one of the best-known specialties of Viennese cuisine, Wiener Schnitzel. And you haven’t really had Wiener Schnitzel unless you’ve had das berühmteste schnitzel wiens (the most famous Schnitzel in Vienna) at Figlmüller. 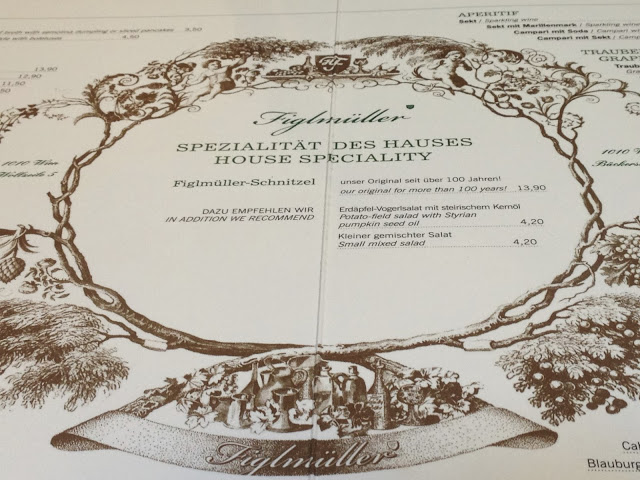 As I mentioned before, we were all about sticking with the tried and true in Vienna, and this restaurant, which has been around for over 100 years, most definitely fell into this category. 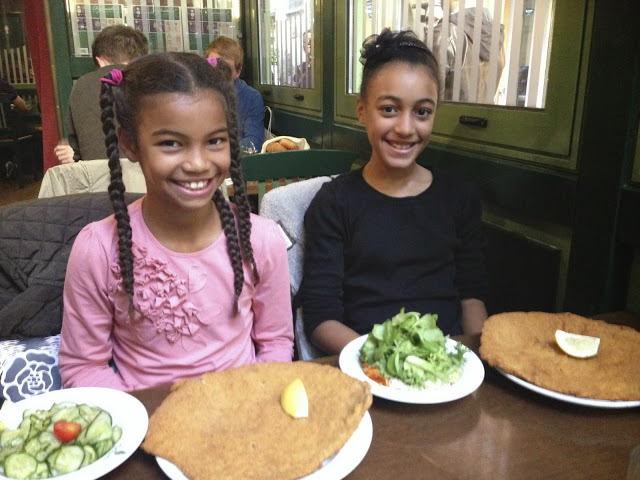 The enormous schnitzel hangs over the edge of the plate and is round, very thin and absolutely delicious. I ordered 2 for the little ladies and me to share, and the 3 of us managed to get through 1 entire schnitzel and about a quarter of the second one. Figlmüller is an institution in Vienna, so it’s wise to make reservations or prepare to wait in a very long line.

Orlando di Castello was the only place we ate that wasn’t decades old. I’d eaten at this cute little restaurant when I was in Vienna for the Christmas markets a couple of years ago and was happy that I was able to find my way back to it. 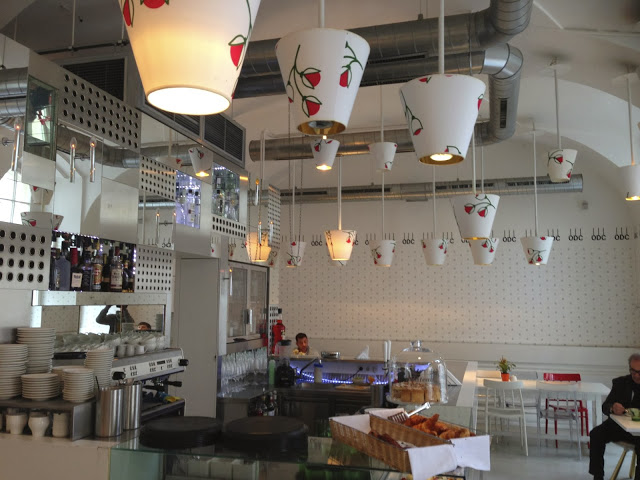 The menu is pretty basic and made up mostly of sandwiches and salads. The Little Ladies and I happily noshed on club sandwiches and burgers in this extremely cute and contemporary café.

Our home base was the Le Méridien Vienna, conveniently located right in the heart of the city and an easy walk to the city’s main attractions. Though it’s part of a chain, its funky décor makes it feel like a boutique hotel. 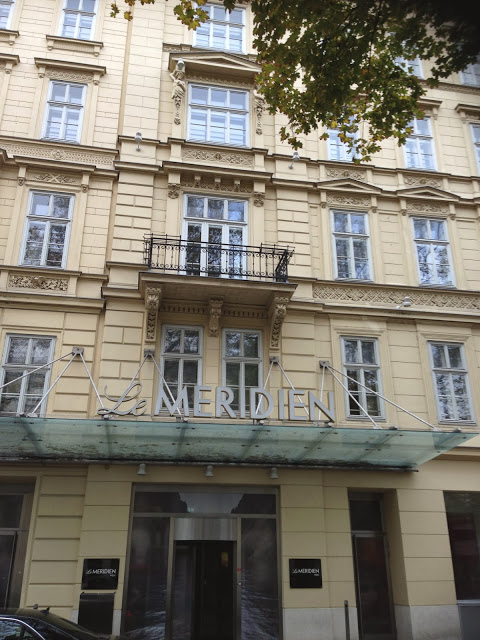 We had a spacious room that had a great view that overlooked the Opernring, but that also meant we got the noise from traffic at night and early in the morning. There was an extensive breakfast buffet, and the Moët bar for coffee, light snacks, and cocktails.

What We Didn’t See

We got a lot in during our time in Vienna, but with only a couple of days couldn’t see it all. We didn’t go to Schönbrunn Palace, the summer residence of the Habsburg family on the outskirts of Vienna. The extensive property, which contains a zoo, park and a greenhouse with an array of exotic plants, deserves at least a day to fully explore. 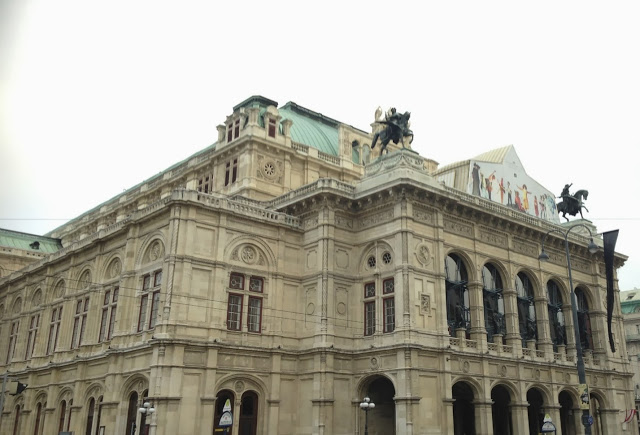 We also missed seeing a performance at the State Opera House, which is a shame considering Vienna is regarded as the City of Music because of its centuries-old musical legacy that ranges from Mozart to Strauss. When I return to Vienna, these things will be at the top of my must-see list.

Have you ever been to Vienna? What’s on your list of things to do and see? 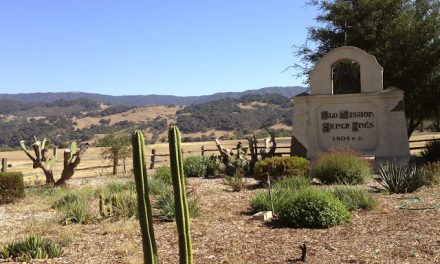 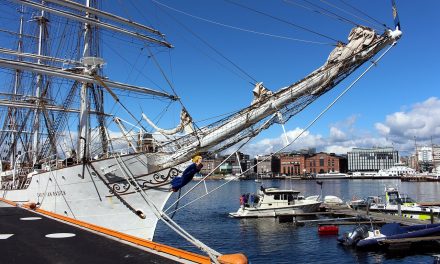 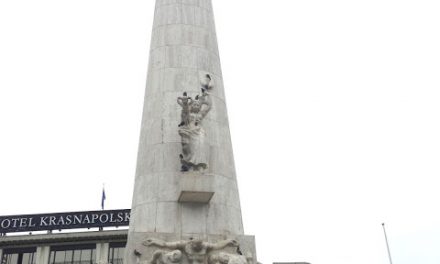